According to timedictionary, Zion National Park is located in the state of Utah, in the southwest of the USA. You reach the south entrance by taking Utah Route 9. The summers are hot, the winters cold. Because Zion Canyon is relatively low-lying, temperatures soar to record highs between June and September, around 45°C. Winters are quite mild, with temperatures around -5°C. Zion is an ancient Hebrew word meaning “place of refuge” or “place of refuge.” An appropriate name for this national park, especially if you approach it from the east side. The Zion-Mount Carmel Highway takes you on red tarmac straight into the two-mile-long Pine Creek Tunnel, with the promised Zion at the end. There’s no better way to enter a park: after the overwhelming rock formations of surrounding parks such as Canyonlands, Bryce of Antelope Canyon is a dark tunnel just what you need to give your retinas some rest. As soon as your eyes get used to the bright daylight, a different world opens up to you. Massive, sparsely vegetated red and white cliffs that lobbed and wide to the ground flank the narrow asphalt road that winds towards the parking lot. In stark contrast to the region’s sharply weathered bedrock, the locally predominant Navajo sandstone appears to have suffered little from water and wind erosion—only the characteristic criss-cross patterns caused by constantly shifting wind directions indicate its fragility.

The first Mormons settled in the Virgin River area from 1847. Only at the beginning of the twentieth century did the government discover the possibilities of the area during an official expedition. The results of the reconnaissance – especially the photographs and paintings – were so spectacular that even sitting President William Taft was informed. The president did not hesitate for long: in 1908 he declared 6,000 hectares of Zion Canyon a real National Monument, called Mukuntuweap. Not that this immediately led to high visitor numbers; only 1,000 people made the difficult uphill and downhill road to Mukuntuweap in the first ten years. Still, their stories were without exception wildly enthusiastic, and interest in Zion Canyon steadily grew.

By 1918, Mukuntuweap had grown to more than 30,000 acres, and official National Park Service qualification was imminent. Time for a new name: Zion National Monument. Because Zion was still difficult to reach due to a lack of roads and the great distance to the nearest train station, the area could not yet become a National Park. Until Stephen Mathers, director of the National Park Service, got involved. From 1919 to 1929 he made a trip to Zion every year, often accompanied by press, scientists and wealthy potential sponsors. Little by little, he finally managed to turn Zion into a well-attended park. After Washington County roads were paved, in 1930 he received permission to dig a 1.7-kilometer tunnel through the sandstone cliffs of Zion Canyon. 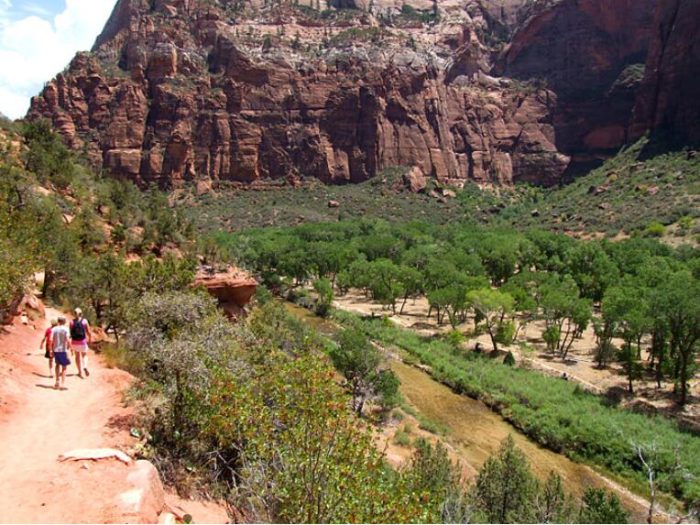